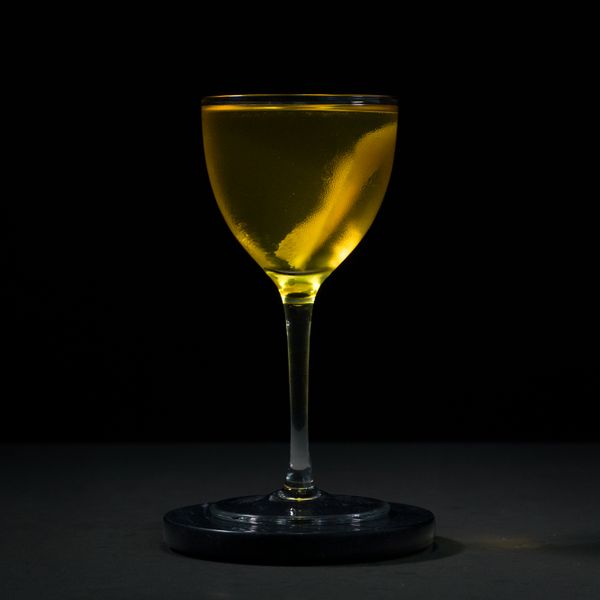 The chain goes like this: in the late 20’s, an unknown bartender created a riff on the famous Negroni cocktail. The drink substituted French vermouth for Italian, and therefore earned a French name: Lucien Gaudin, who was a French fencer at the apex of his fame. This cocktail would be revived by Ted Haigh in his now infamous book Vintage Spirits and Forgotten Cocktails,which would be the precursor to yet another riff, this time on the Gaudin, by Jack McGarry in the 2015 book The Negroni. This second-generation riff was named the Belfast Bastard, which is a touch funny since the recipe continues the French push by employing pamplemousse rose but—for reasons that aren’t documented or easy to explain—does a hard right in the naming department and opts for the capital of Northern Ireland.

Weird naming choices aside, this recipe offers a fabulous alternative to the classic Negroni and an excellent opportunity to experiment with pamplemousse liqueur, a liqueur that can sometimes be difficult to find a home for in the cocktail world. The flavor is metaphorically equivalent to being slapped around by an enormous grapefruit peel: grassy, oily, and earthy. The thick, viscous liqueurs combine for a strong, creamy drink that feels like a deconstructed version of its predecessors. On first sip, we waxed poetic, claiming it tasted like the “ghost” of a Negroni; all of the quintessential constructs were there, but they were created by different ingredients. We like Gran Classico a lot in this drink, as the drink is packed with bold flavors that stand up to the hyper-bitter’s boisterous personality. For gin, we opt for a dry, lemon-first option like Benham's. Herbal gins will not do as well here as they will conflict with the strong citrus peel flavors. The original recipe directs to serve the cocktail naked, but we rarely pass up the opportunity for a grapefruit peel garnish.