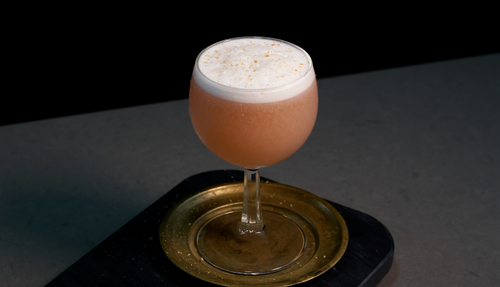 In their eponymous drinks manual, the good people behind the famous NYC bar Dead Rabbit refer to the Suissesse as “the culmination of absinthe in the mixed drink format.” The traditional New Orleans version is brunch-ready: made with a mix of cream, egg, absinthe, orgeat, and maybe a bit of orange flower water or creme de menthe, often looking very much like an absinthe laced Ramos Gin Fizz. Dead Rabbit offers a wholly original adaptation that elevates the concept and delivers complex flavor through the addition of creme de cacao and aquavit, while dropping the cream. Credited with inspiring this reimagined version is C.F. Lawlor's The Mixicologist. Oddly enough, in his 1899 drinks manual, Lawlor includes recipes for two very similar drinks, both a Suissesse and a Swiss S.; the former of which is closer to the familiar NOLA eye-opener, while the latter is referenced by Dead Rabbit. While this recipe is a welcome change from the standard milkshakey mix, we’re not convinced it’s as suited to brunch. It’s intensity and complexity will definitely wake your butt up, but may better serve as a perky pick me up to kick off a Friday night; or when you just need something bracing to come back to life.

This drink is a true celebration of absinthe, which asserts its botanical flavors from start to finish. Nutmeg and anise dominate the nose, along with a hit of lemon oil, and a subtle chocolate note right before it hits the tongue. The sip is initially sharp with absinthe, followed by chocolate and a smooth, creamy texture from the egg white which nicely complements the drink's strong and rich flavors. Peychaud's bitters add just a touch of fruity citrus which lightens the heft. Creme de cacao is an essential sweetener, and really comes through on the finish, alongside yet more anise. There aren’t a lot of absinthe based drinks that have successfully made it outside the pages of classic cocktail books, even less with a combined base of absinthe and aquavit, so this drink is truly unique.

All of this anise has the potential to be a bit bracing, so if that isn’t your thing you could consider cutting back on the absinthe, or increasing the aquavit. Definitely use Linie Aquavit here; this cask aged variety is more mellow and smooth than clear aquavits, which prevents the drink from becoming a total anise bomb. For a delightfully smooth absinthe that shines in this mix, we really like Absinthia. If you have it on hand you could try subbing herbsaint in place of absinthe, which was common practice when absinthe was banned. One thing is for sure: drink this very fresh, as it is not the kind of thing you want lingering around for an hour.